First Settlers
Niles history goes back before its incorporation in 1899. It was first settled by Potawatomi Indians in the 1700s. The first pioneers were mainly German, settling in this area because of the rich farmland and its low cost. The vicinity of Milwaukee Avenue and Touhy Avenue became known as Dutchman's Point circa 1830s.

The First Buildings
In 1832 John Schadegar and Jules Perren built the first log cabin. The second house was built by Christian F. Ebinger, who with his family from Ann Arbor, Michigan, settled in the area in 1834. The Ebingers cultivated friendly relations with Indians. Christian was particularly well acquainted with Chief Black Hawk, with whom he smoked the pipe of peace. 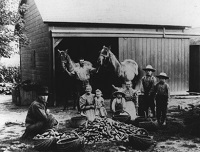 
The first school was erected in 1838, in the area of what is now known as Touhy Avenue and Harlem Avenue. The early settlers engaged in truck farming / greenhouses and traveled the North Plank Road (Milwaukee Avenue) to the Chicago Markets.

The Incorporation of Niles
Niles Township was incorporated in 1850. The only doctor in the area was Theo Hoffman who arrived in about 1850. The Dannish, Bohemian, Polish, and English immigrants filtered into Dutchman's point around 1870. The population of the Village of Niles in 1884 was 200 people and consisted of:


The First Mayor of Niles

Blue Boy
Blue Boy was the first fire wagon in Niles. It was used as a hand drawn unit in 1899 to 1990, converted to horse drawn in 1910. The unit is now at the Niles Fire Station Number Two at Dempster and Cumberland.

Leaning Tower Monument
In 1932, Robert Ilg constructed a recreational park for his employees, consisting of twin swimming pools and cabanas, plus featuring a half size replica of the Leaning Tower of Pisa to cover the pool's water tank.

Village Expansion
The village expanded by annexing an unincorporated area that became Golf Mill Shopping Center, dedicated in 1959. With a new village administration building, a new Family Fitness and Senior Center, expansion of the library, and the Niles Middle school (known as Culver), Niles has continued to progress within the community. 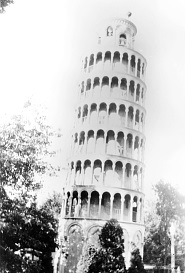